How to Fight Eminent Domain 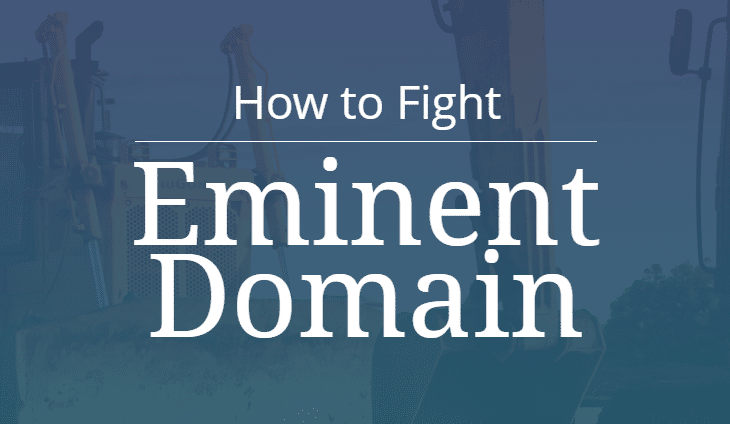 Both the economy and population in the State of Texas are booming. New homes and businesses require improved infrastructure. Development and infrastructure improvements require land. Unfortunately for property owners in Texas, that may include your land. Many landowners are unaware that Federal, State, local governments, and even private companies have the right to take private property for public use. This right is known as eminent domain.

Fortunately, you have legal rights to protect your interests when facing eminent domain actions.

Consult with an Attorney

If you have received a Notice that your property will be taken from you through eminent domain, you need to contact an experienced eminent domain lawyer to represent you. Avoid communicating with any governmental entity or eminent domain authority directly, as any information that you provide could be used against you in future proceedings. Your attorney will help you to level the playing field and help you to identify possible legal challenges and contests in the eminent domain process, in an effort to ensure that you receive fair and just compensation for your property.

The Government’s right to seize and convert land is not unlimited. While the power of eminent domain is evident, you, as a landowner, have important Constitutional and judicial rights to protect yourself and your property. Landowners in Texas are protected under both the U.S. Constitution and the Texas Constitution. The 5th Amendment of the U.S. Constitution states that land can only be taken for a “public use” and requires that the Federal Government provide landowners with “just compensation”. Similarly, the Texas Constitution requires that property owners be given “adequate compensation” when their property is “taken, damaged, or destroyed” for public use.

The following are some common defenses meant to highlight how to fight eminent domain in Texas:

The Government Lacks a Sufficient Public Purpose for Condemnation

The “public purpose” requirement under the 5th Amendment of the Constitution has been subject to much litigation. As a general matter, a “public use” is one where the use of a private property will benefit the interests of the public. Litigation, and a basis for challenging an eminent domain action, typically arises where land is taken primarily for private purposes. The definition of what amounts to a public benefit has been broadened over the years through litigation. In the landmark case on the public use requirement, the Supreme Court held in Kelo v. City of New London, Connecticut, 545 U.S. 469 (2005), that general benefits which the community would enjoy from economic development were sufficient to constitute a public use.

The Kelo decision extended the definition of public use to for-profit development projects, allowing the Government to seize property for the purposes of allowing private developers to redevelop a portion of the city. Other examples of permissible public uses include expanding roadways, building schools, utilities, and even creating or expanding a pipeline route.  Pipeline cases are particularly common in Texas, with more and more landowners losing property to large oil companies.

While the definition of public use has been expanded over the years to include those that also involve private benefits, challenging an eminent domain action on the basis that the proposed use does not benefit the public can be a successful strategy.

The Government Does Not Need to Condemn Your Property

Even where there exists a valid public use for the purposes of eminent domain, that does not imply that the condemnation is otherwise valid. The condemning authority will often attempt to carve out the most favorable route possible. For instance, consider an oil company proposing to run a pipeline through a much larger portion of your property than required. In such cases, it is possible to argue that the proposed use is arbitrary or capricious, and that your land (or a portion of your land) is not required.

The Government Wants to Take Your Property Without Paying Just Compensation

For the majority of eminent domain cases, the most likely legal defense will focus on the just compensation requirement. The Constitution requires that the Government pay landowners “just” and “adequate” compensation for property that is taken. The Condemning Authority will often attempt to take a landowner’s property without paying just compensation. The primary reason: to save money. Often, the methods used to value the property by the Condemning Authority are tailored to fit its financial interests and, therefore, will present an inaccurate valuation of the property.

Determining what constitutes just compensation can be complex, and the matter is further complicated in the case of partial condemnations. As a general rule, where an entire property is taken, the Government/Condemning Authority must pay the landowner an amount equal to the fair market value of said property. Fair market value is the amount that the landowner could get if he or she were to sell the property to a third party. In simplest terms, the realistic price of the property if it were to sell in the current market conditions. This value can be determined by using various methods including, but not limited to, comparative market analysis and professional appraisal.

Where the Government/Condemning Authority is merely seizing a portion of the property (easement), just compensation also takes into account the difference between the fair market value of the property before it is taken and after it is taken. Such considerations are meant to account for any and all diminishments in the value of the remaining property. Consider, for instance, that a property previously unencumbered by existing pipeline easements is acquired by way of eminent domain to install a .50-mile-long section of pipeline. Once installed, the pipeline will cause the value of the entire property to diminish invariably due to a handful of associated risks that pipelines carrying crude oil, natural gas, volatile liquids, etc., carry with them, affecting not only potential buyer’s perception of the property, but the original condition of the property on the whole.

When challenging the just compensation requirement, it is imperative to have the assistance of an experienced eminent domain attorney. Not only can an attorney advise you of your rights, but he or she can assist you in maximizing your compensation. A lawyer will help you to argue that the property is worth more than the Condemning Authority is offering or claims it to be worth and, in some cases, retain an experienced real estate appraiser, broker, or other experts to value your property both before and after the taking.

Contact us today to discuss your rights or for questions about how to fight eminent domain in Texas.